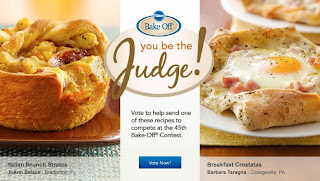 Beginning May 12, 2011, America will have the opportunity to vote for 10 of the 20 original recipes posted on www.bakeoff.com.  The recipes will be posted in pairs every two weeks and during each two-week period, consumers will have the opportunity to cast their vote for their favorite of the two recipes. Voting is limited to one vote per person per each pair of recipes. Voters must be registered members of www.pillsbury.com and 18 years of age or older as of May 1, 2011 to participate.
At the end of two weeks, the home cook whose recipe receives the most votes in each pair will become a finalist in the 45th Pillsbury Bake-Off® Contest taking place in Orlando, Florida from March 25-27, 2012...getting one step closer to the  $1 million grand prize.  The contest will feature 100 original recipes-90 recipes whose creators will directly earn a spot at the competition and the 10 winning recipes determined by people like you through You Be the Judge!

This week, Italian Brunch Stratas submitted by JoAnn Belack of Bradenton, FL faces off against Breakfast Crostatas entered by Barbara Taragna of Collegeville, PA.  It's up to you to decide which of these creative home cooks will compete for the $1 million grand prize so visit www.bakeoff.com for official rules and to cast your vote!
Posted by Unknown at 8:49 PM

Promote Your Page Too

This is a personal weblog. The opinions expressed here represent my own. All data and information provided on this site is for informational purposes only. Spend Less 2 Save More makes no representations as to accuracy, completeness, currentness, suitability, or validity of any information on this site and will not be liable for any errors, omissions, or delays in this information or any losses, injuries, or damages arising from its display or use. All information is provided on an as-is basis.

In addition, my thoughts and opinions change from time to time…I consider this a necessary consequence of having an open mind. This weblog is intended to provide a semi-permanent point in time snapshot and manifestation of the various memes running around my brain, and as such any thoughts and opinions expressed within out-of-date posts may not the same, nor even similar, to those I may hold today.